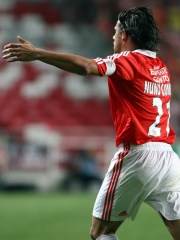 Nuno Miguel Soares Pereira Ribeiro OIH (born 5 July 1976), known as Nuno Gomes, is a Portuguese former professional footballer who played as a striker. He was given the nickname Gomes during childhood after Fernando Gomes, and was regarded one of the country's most recognisable attacking players in the 1990s and 2000s; he consistently scored for both club and country, and was also capable of being a good link-up player, accumulating a number of assists throughout his career, which was spent mainly with Benfica, for which he netted 166 goals in 398 games over the course of 12 seasons.Gomes represented Portugal in two World Cups and three European Championships. Read more on Wikipedia