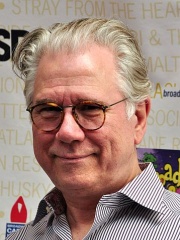 John Bernard Larroquette (born November 25, 1947) is an American actor. He is best known for his starring roles in the NBC military drama series Baa Baa Black Sheep (1976–1978), the NBC sitcom Night Court (1984–1992) (for which he received four consecutive Primetime Emmy Awards for Outstanding Supporting Actor in a Comedy Series), the NBC sitcom The John Larroquette Show (1993–1996), the David E. Kelley legal drama series The Practice (1997-2002), the ABC legal comedy-drama series Boston Legal (2004–2008), and the TNT series The Librarians (2014–2018). In 2011, he made his Broadway debut in the musical revival of Frank Loesser's How to Succeed in Business Without Really Trying alongside Daniel Radcliffe. He played J.B. Read more on Wikipedia

Among actors, John Larroquette ranks 3,777 out of 10,030. Before him are Vadim Glowna, Anna Torv, Ann Sheridan, Chace Crawford, Jason O'Mara, and Jason Lee. After him are Girish Karnad, Benedicta Boccoli, So Ji-sub, Julia Louis-Dreyfus, Zhao Wei, and JoBeth Williams.