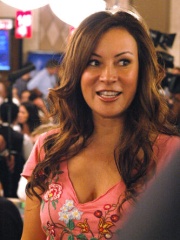 Jennifer Tilly (born Jennifer Ellen Chan; September 16, 1958) is an American-Canadian actress and poker player. Known for her distinctive voice and comedic timing, she has been nominated for an Academy Award and two Saturn Awards. Tilly had her breakthrough playing Olive Neal in the black comedy film Bullets Over Broadway (1994), which earned her a nomination for the Academy Award for Best Supporting Actress. Read more on Wikipedia

Among actors, Jennifer Tilly ranks 2,450 out of 10,030. Before her are Pierre Barouh, Marshall Bell, Grant Show, Dan O'Herlihy, Herman van Veen, and Will Patton. After her are Lothaire Bluteau, Eugene Levy, Mike Connors, Wendy Makkena, Mitchell Ryan, and Maureen Stapleton.