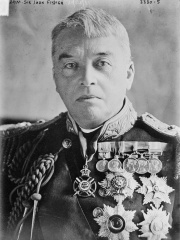 John Arbuthnot Fisher, 1st Baron Fisher, (25 January 1841 – 10 July 1920), commonly known as Jacky or Jackie Fisher, was a British Admiral of the Fleet known for his efforts at naval reform. He had a huge influence on the Royal Navy in a career spanning more than 60 years, starting in a navy of wooden sailing ships armed with muzzle-loading cannon and ending in one of steel-hulled battlecruisers, submarines and the first aircraft carriers. Fisher has a reputation as an innovator, strategist and developer of the navy rather than as a seagoing admiral involved in major battles, although in his career he experienced all these things. Read more on Wikipedia

Since 2007, the English Wikipedia page of John Fisher, 1st Baron Fisher has received more than 426,982 page views. His biography is available in 16 different languages on Wikipedia making him the 1,000th most popular military personnel.

Among MILITARY PERSONNELS In Sri Lanka