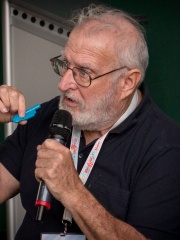 John Thomas Draper (born March 11, 1943), also known as Captain Crunch, Crunch or Crunchman (after the Cap'n Crunch breakfast cereal mascot), is an American computer programmer and legendary former phone phreak. He is a widely known figure within the computer programming world and the hacker and security community and generally lives a nomadic lifestyle. Following the emergence of the Me Too movement in 2017, allegations against him dating back decades surfaced in media reports and in social media posts concerning claims of inappropriate sexual behavior with young men. Read more on Wikipedia

Since 2007, the English Wikipedia page of John Draper has received more than 426,134 page views. His biography is available in 18 different languages on Wikipedia making him the 64th most popular computer scientist.