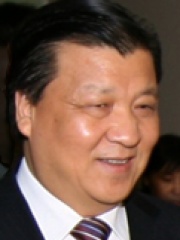 Liu Yunshan (; simplified Chinese: 刘云山; traditional Chinese: 劉雲山; pinyin: Liú Yúnshān; born July 1947) is a retired Chinese politician. He was a member of the Politburo Standing Committee, the de facto top decision-making body of China, between 2012 and 2017; he was broadly tasked with the work of the party's secretariat, overseeing propaganda and ideological indoctrination, as well as party organization, in addition to serving as President of the Central Party School.Liu built his career in Inner Mongolia, working initially as a teacher, then a Xinhua reporter, before entering the Communist Youth League and the Inner Mongolia party propaganda department. He had a short stint working as the Party Secretary of the city of Chifeng, in Inner Mongolia. Read more on Wikipedia