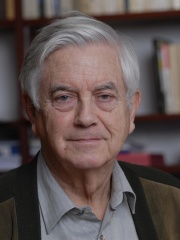 Frederik "Frits" Bolkestein (Dutch pronunciation: [ˈfreːdərɪk frɪdz ˈbɔlkəstɛi̯n] (listen); born 4 April 1933) is a retired Dutch politician of the People's Party for Freedom and Democracy (VVD) and businessperson who served as European Commissioner from 16 September 1999 until 22 November 2004. Bolkestein studied Mathematics at the Oregon State University getting a Bachelor of Mathematics degree and continued his study at the University of Amsterdam obtaining a Master of Mathematics degree followed by a postgraduate education in Philosophy and Greek literature at his alma mater obtaining Masters of Philosophy and Arts degrees, followed by another postgraduate study in Economics at the London School of Economics obtaining a Master of Economics degree and additional study in Law at the Leiden University obtaining a Master of Laws degree. Bolkestein worked as a corporate director for Royal Dutch Shell from May 1960 until July 1976 and as a manager for an engineering company in Amsterdam from September 1976 until January 1978. Read more on Wikipedia