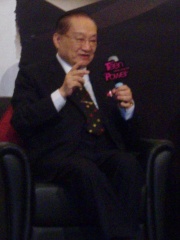 Louis Cha Leung-yung (Chinese: 查良鏞; 6 February 1924 – 30 October 2018), better known by his pen name Jin Yong (Chinese: 金庸), pronounced "Gum Yoong" in Cantonese, was a Chinese wuxia ("martial arts and chivalry") novelist and essayist who co-founded the Hong Kong daily newspaper Ming Pao in 1959 and served as its first editor-in-chief. He was Hong Kong's most famous writer.His wuxia novels have a widespread following in Chinese communities worldwide. His 15 works written between 1955 and 1972 earned him a reputation as one of the greatest and most popular wuxia writers ever. Read more on Wikipedia

Since 2007, the English Wikipedia page of Jin Yong has received more than 836,024 page views. His biography is available in 33 different languages on Wikipedia making him the 633rd most popular writer.

Among writers, Jin Yong ranks 630 out of 4,883. Before him are Dashiell Hammett, Witold Gombrowicz, Hermann Broch, Yaşar Kemal, Aziz Nesin, and Giosuè Carducci. After him are Marcus Terentius Varro, Geoffrey of Monmouth, A. J. Cronin, Kōbō Abe, Marie-Antoine Carême, and Alexander Herzen.