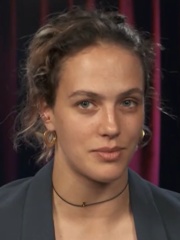 Jessica Rose Brown Findlay (born 14 September 1987) is an English actress. She played Lady Sybil Crawley in the ITV television period drama series Downton Abbey and Emelia Conan Doyle in the 2011 British comedy-drama feature film Albatross.In 2014, she appeared as Beverly Penn in the film adaptation of the Mark Helprin novel Winter's Tale. In 2015, she co-starred in Paul McGuigan's Victor Frankenstein as Lorelei, the Esmerelda-like acrobat. In 2016, she joined the cast of the biopic feature film, England is Mine, about the early life and career of English singer Morrissey, who co-founded the indie rock band The Smiths.Brown Findlay portrayed Charlotte Wells, a madam's daughter and sex worker, in the three series run of Harlots (2017–2019), a period drama television series initially screening on ITV Encore in the UK and on Hulu Plus in the US. Read more on Wikipedia