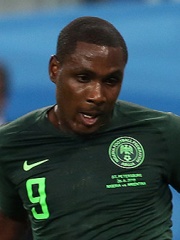 Odion Jude Ighalo (born 16 June 1989) is a Nigerian professional footballer who plays as a striker for English Premier League club Manchester United, on loan from Shanghai Greenland Shenhua of the Chinese Super League. After starting his career at Nigerian clubs Prime and Julius Berger, Ighalo moved to Norwegian club Lyn in 2007. A year later, he was signed by Italian club Udinese, spending most of his tenure on two separate loan spells with Spanish club Granada. Read more on Wikipedia

Since 2007, the English Wikipedia page of Odion Ighalo has received more than 2,973,748 page views. His biography is available in 25 different languages on Wikipedia making him the 5,296th most popular soccer player.

Among SOCCER PLAYERS In Nigeria