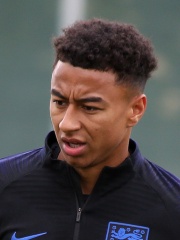 Jesse Ellis Lingard (born 15 December 1992) is an English professional footballer who plays as an attacking midfielder or as a winger for Premier League club Manchester United and the England national team. He has won the UEFA Europa League, FA Cup, FA Community Shield and EFL Cup, becoming one of only three players to score in all of the latter three finals.Lingard made his senior debut while on loan at Leicester City in 2012, and spent time on loan at Birmingham City and Brighton & Hove Albion during the 2013–14 season and at Derby County in 2015. He broke into the Manchester United first team under Louis van Gaal in 2015, and was a regular in the side until 2018, when he fell out of favour under Ole Gunnar Solskjær and struggled to regain his place in the side. Read more on Wikipedia