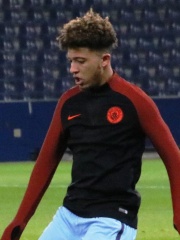 Jadon Malik Sancho (born 25 March 2000) is an English professional footballer who plays as a winger for Premier League club Manchester United and the England national team. Widely regarded as one of the best young players in the world, he is known for his trickery, game intelligence, pace and use of feints in one-on-one situations.Previously a youth player with Watford and Manchester City, Sancho signed his first senior contract with Borussia Dortmund in 2017. In his second season, he established himself as a first-team regular and was named in the 2018–19 Bundesliga Team of the Season. Read more on Wikipedia