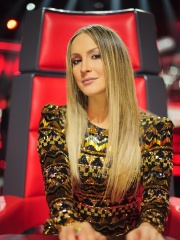 Cláudia Cristina Leite Inácio Pedreira (Brazilian Portuguese: [ˈklawdʒɐ ˈlejtʃi]; born 10 July 1980) is a Brazilian singer, songwriter, entrepreneur and television personality. She rose to fame in late 2002 as the lead vocalist of the Axé music group Babado Novo. The group achieved a string of consecutive diamond-certified hit singles in Brazil and five golden and platinum albums from 2003 to 2007, as granted by the Brazilian Association of Record Producers (ABPD).Leitte embarked on a solo career and released her first solo album Ao Vivo em Copacabana (2008), recorded live in front of a crowd of over a million people. Read more on Wikipedia

Among singers, Claudia Leitte ranks 1,966 out of 3,541. Before her are Satoshi Ohno, Bad Bunny, CL, Bobby Helms, Axelle Red, and William DuVall. After her are Willy William, M. Pokora, Wendy, Arabian Prince, Geir Rönning, and Solar.