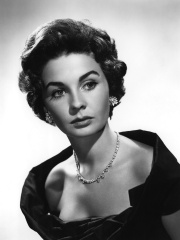 Jean Merilyn Simmons, (31 January 1929 – 22 January 2010) was a British actress and singer. One of J. Arthur Rank's "well-spoken young starlets", she appeared predominantly in films, beginning with those made in Great Britain during and after World War II, followed mainly by Hollywood films from 1950 onwards.Simmons was nominated for the Academy Award for Best Supporting Actress for Hamlet (1948), and won a Golden Globe Award for Best Actress for Guys and Dolls (1955). Her other film appearances include Young Bess (1953), The Robe (1953), The Big Country (1958), Elmer Gantry (1960), Spartacus (1960), and the 1969 film The Happy Ending, for which she was nominated for the Academy Award for Best Actress. Read more on Wikipedia

Jean Simmons is most famous for her roles in films such as Guys and Dolls, Spartacus, and Elmer Gantry.