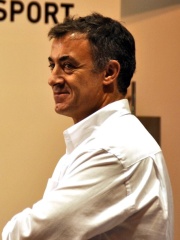 Jean Alesi (born Giovanni Alesi; 11 June 1964) is a French racing driver of Italian origin. His father, Franco, was a mechanic from Alcamo, Sicily, and his mother was from Riesi. After successes in the minor categories, notably winning the 1989 Formula 3000 Championship, his Formula One career included spells at Tyrrell, Benetton, Sauber, Prost, Jordan and Ferrari, where he proved very popular among the tifosi. Read more on Wikipedia

Since 2007, the English Wikipedia page of Jean Alesi has received more than 562,516 page views. His biography is available in 35 different languages on Wikipedia making him the 83rd most popular racing driver.