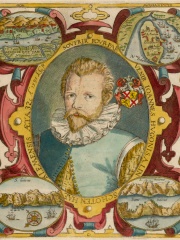 Jan Huyghen van Linschoten (1563 – 8 February 1611) was a Dutch merchant, trader and historian. An alternative (modern Dutch) spelling of his second name is Huijgen. He travelled extensively along the East Indies' regions under Portuguese influence and served as the archbishop's secretary in Goa between 1583 and 1588. Read more on Wikipedia

Since 2007, the English Wikipedia page of Jan Huyghen van Linschoten has received more than 66,451 page views. His biography is available in 15 different languages on Wikipedia making him the 131st most popular historian.

Among HISTORIANS In Netherlands

Among historians born in Netherlands, Jan Huyghen van Linschoten ranks 2. Before him are Johan Huizinga (1872). After him are Johan Rudolph Thorbecke (1798) and Johannes Meursius (1579).