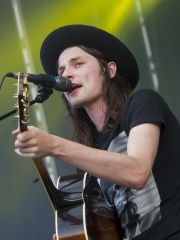 James Michael Bay (born 4 September 1990) is an English singer-songwriter and guitarist. In 2014, he released his single "Hold Back the River", which was certified platinum, before releasing his debut studio album Chaos and the Calm (2014). The album went to number one in the UK and number 15 in the US. In February 2015, Bay received the Brit Awards "Critics' Choice" award. Read more on Wikipedia

Among singers, James Bay ranks 3,008 out of 3,528. Before him are Emmanuel Moire, Donny Montell, Sigrid, Astrid S, Dalal Midhat-Talakić, and Jón Jósep Snæbjörnsson. After him are Emre Aydın, Siobhán Donaghy, Rich the Kid, Lewis Capaldi, Ott Lepland, and Elhaida Dani.