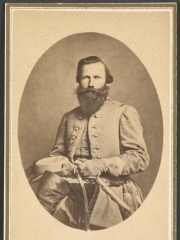 James Ewell Brown "Jeb" Stuart (February 6, 1833 – May 12, 1864) was a United States Army officer from Virginia who became a Confederate States Army general during the American Civil War. He was known to his friends as "Jeb,” from the initials of his given names. Stuart was a cavalry commander known for his mastery of reconnaissance and the use of cavalry in support of offensive operations. While he cultivated a cavalier image (red-lined gray cape, the yellow waist sash of a regular cavalry officer, hat cocked to the side with an ostrich plume, red flower in his lapel, often sporting cologne), his serious work made him the trusted eyes and ears of Robert E. Lee's army and inspired Southern morale.Stuart graduated from West Point in 1854, and served in Texas and Kansas with the U.S. Read more on Wikipedia

Page views of J. E. B. Stuarts by language