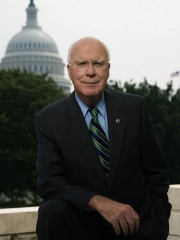 Patrick Joseph Leahy (; born March 31, 1940) is an American politician serving as the senior United States Senator from Vermont, a seat to which he was first elected in 1974. A member of the Democratic Party, Leahy held the position of president pro tempore of the United States Senate from December 17, 2012 to January 3, 2015, and was thus during that time third in the presidential line of succession. Now in his eighth six-year term of office, he is currently (since the December 2012 death of Daniel Inouye) the most senior member of the Senate, and is also the last of the Senate's "Watergate Babies" – Democrats first elected to Congress in 1974, following President Richard Nixon's August 9, 1974 resignation over the Watergate scandal. Additionally, Leahy remains the only sitting U.S. Read more on Wikipedia

Since 2007, the English Wikipedia page of Patrick Leahy has received more than 2,283,794 page views. His biography is available in 30 different languages on Wikipedia making him the 12,656th most popular politician.

Among politicians, Patrick Leahy ranks 12,549 out of 14,801. Before him are Lugal-Anne-Mundu, Margaret Beckett, George Read, Mzilikazi, Bodo Ramelow, and Ishme-Dagan. After him are Sükhbaataryn Batbold, Bridei I, Askar Mamin, Bernard Dowiyogo, Claudia Roth, and William Bradford.