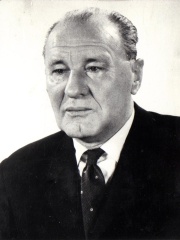 János Kádár (; Hungarian: [ˈjaːnoʃ ˈkaːdaːr]; 26 May 1912 – 6 July 1989) was a Hungarian communist leader and the General Secretary of the Hungarian Socialist Workers' Party, presiding over the country from 1956 until his retirement in 1988. His 32-year term as General Secretary covered most of the period the People's Republic of Hungary existed. Read more on Wikipedia

Since 2007, the English Wikipedia page of János Kádár has received more than 356,112 page views. His biography is available in 48 different languages on Wikipedia making him the 1,049th most popular politician.

Among politicians, János Kádár ranks 1,044 out of 14,801. Before him are Mary, Queen of Hungary, Hamid Karzai, Abd el-Krim, William Jennings Bryan, Quintus Fabius Maximus Verrucosus, and Princess Ludovika of Bavaria. After him are Abu Sufyan ibn Harb, Yu the Great, Kara Mustafa Pasha, Leo V the Armenian, Avitus, and Peter I of Serbia.