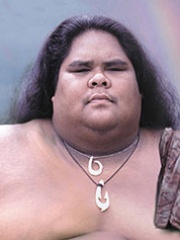 Israel Kaʻanoʻi Kamakawiwoʻole (Hawaiian: pronounced [kəˌmɐkəˌvivoˈʔole]), Hawaiian for 'the fearless eye, the bold face'; May 20, 1959 – June 26, 1997), also called Bruddah Iz or IZ, was a Native Hawaiian singer-lyricist, musician and Hawaiian sovereignty activist. He achieved commercial success outside Hawaii when his album Facing Future was released in 1993. His medley of "Somewhere Over the Rainbow/What a Wonderful World" was released on his albums Ka ʻAnoʻi and Facing Future. Read more on Wikipedia

Since 2007, the English Wikipedia page of Israel Kamakawiwoʻole has received more than 7,521,719 page views. His biography is available in 52 different languages on Wikipedia making him the 136th most popular musician.