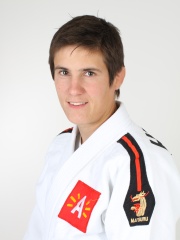 Ilse Heylen (born 21 March 1977, Edegem) is a Belgian judoka. She won the bronze medal at the 2004 Summer Olympics in Athens, Greece.At the 2004 Summer Olympics in Athens, Heylen competed in the Half-lightweight (52 kg). She won her first two bouts against Madagascar's Naina Ravaoarisoa and Kazakhstan's Sholpan Kaliyeva before losing to Cuba's Amarilis Savón, the eventual bronze medal winner, she advanced to the repechage however. Read more on Wikipedia

Since 2007, the English Wikipedia page of Ilse Heylen has received more than 9,911 page views. Her biography is available in 15 different languages on Wikipedia. Ilse Heylen is the 105th most popular martial arts.