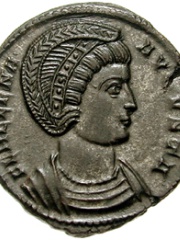 Helena, Helena Augusta, or Saint Helena (; Greek: Ἑλένη, Helénē; AD c. 246/248 – c. 330) was an Empress of the Roman Empire and mother of Roman emperor Constantine the Great. She was born in the lower classes traditionally in the Greek city of Drepana, Bithynia, in Asia Minor, which was renamed Helenopolis in her honor, though several locations have been proposed for her birthplace and origin. Helena ranks as an important figure in the history of Christianity. Read more on Wikipedia

Helena is most famous for her discovery of the True Cross.

Page views of Helenas by language

Among companions, Helena ranks 6 out of 687. Before her are Nefertiti, Anne Boleyn, Empress Elisabeth of Austria, Catherine de' Medici, and Aisha. After her are Catherine of Aragon, Fatimah, Empress Joséphine, Eva Braun, Khadija bint Khuwaylid, and Marie Louise, Duchess of Parma.

Among people born in 250, Helena ranks 1. After her are Galerius, Constantius Chlorus, Saint Florian, Pope Caius, Lactantius, Pope Miltiades, Saint Maurice, Pope Marcellinus, Pope Alexander I of Alexandria, Pope Eusebius, and Carinus. Among people deceased in 330, Helena ranks 1. After her are Iamblichus, Tiridates III of Armenia, and Flavia Julia Constantia.