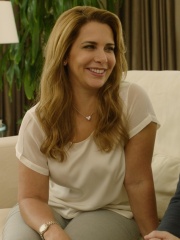 Princess Haya bint Hussein (Arabic: الأميرة هيا بنت الحسين‎; born 3 May 1974), commonly known as HRH Princess Haya of Jordan, is the daughter of King Hussein of Jordan and his third wife Queen Alia, and the half-sister of King Abdullah II. She is a graduate of the University of Oxford in England and an accomplished equestrian. She represented Jordan at the 2000 Summer Olympics in Sydney, Australia and is the two-term President of the International Federation for Equestrian Sports (FEI). Read more on Wikipedia

Since 2007, the English Wikipedia page of Haya bint Hussein has received more than 1,412,553 page views. Her biography is available in 23 different languages on Wikipedia making her the 10,281st most popular politician.