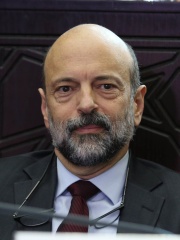 Omar Razzaz (Arabic: عمر الرزاز; born 17 May 1961) was the 42nd Prime Minister of Jordan from June 14, 2018 to October 12, 2020. He was designated to form a new government on 5 June 2018 after his predecessor resigned as a result of widespread protests against IMF-backed austerity measures in the country.Born in Al-Salt, Razzaz began his schooling in Amman, later continuing his studies abroad. He was director of several national and international institutions. Read more on Wikipedia

Among politicians, Omar Razzaz ranks 15,829 out of 15,577. Before her are Bob Kerrey, Clara Rojas, Emiliano Rodríguez, Leonard Wood, Kaj Leo Johannesen, and Princess Nathalie of Sayn-Wittgenstein-Berleburg. After her are Habiba Sarābi, Daniel Goldin, John Delaney, Joseph Urusemal, I. I. Chundrigar, and Lisa Murkowski.