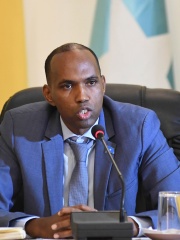 Hassan Ali Khaire (or alternatively transliterated as Hassan Ali Khayre, Somali: Xasan Cali Khayre, Arabic: حسن علي خيري‎; born 1969), popularly known as Hassan Khaire, is a Somali activist and former refugee to Norway, manager, politician and is the former Prime Minister of Somalia. He was appointed on 23 February 2017 by Somalia President Mohamed Abdullahi Mohamed "Faarmajo" and Somali Prime Minister Hassan Khaire promptly resigned on Saturday July 25th after MPs tried to pass a vote of no confident vote without due improper process and has decided to be an example for the Somali people by resigning from the position he has held for the Somali people,” said PM Khaire, adding that he was doing so to set a good example in leadership despite the MPs move which he termed unconstitutional. Khaire is a former oil executive. Read more on Wikipedia