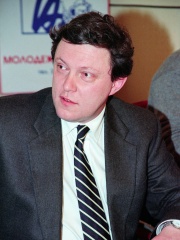 Grigory Alexeyevich Yavlinsky (Russian: Григо́рий Алексе́евич Явли́нский; born 10 April 1952) is a Russian economist and politician. He is best known as the author of the 500 Days Programme, a plan for the transition of the Soviet regime to a free-market economy, and for his leadership of the social-liberal Yabloko party. He ran twice for Russia's presidency – in 1996, against Boris Yeltsin, finishing fourth with 7.3% of the vote; and in 2000, against Vladimir Putin, finishing third with 5.8%. Read more on Wikipedia

Among ECONOMISTS In Ukraine

Among economists born in Ukraine, Grigory Yavlinsky ranks 3. Before him are Ludwig von Mises (1881) and Zbigniew Messner (1929).