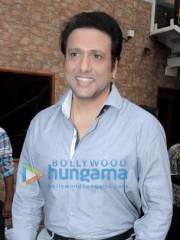 Govind Arun Ahuja (born 21 December 1963), known mononymously as Govinda is an Indian film actor, comedian, dancer, and former politician, known best for his work in Hindi-language films. Famous for his slapstick performances and dancing skills, Govinda is considered a mass entertainer and a greatly successful actor in Bollywood. As such, Govinda has received 12 Filmfare Award nominations, a Filmfare Special Award, a Filmfare Award for Best Comedian, and 4 Zee Cine Awards. Read more on Wikipedia

Since 2007, the English Wikipedia page of Govinda has received more than 542,319 page views. His biography is available in 32 different languages on Wikipedia making him the 5,041st most popular actor.

Page views of Govindas by language