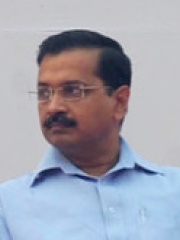 Arvind Kejriwal (born 16 August 1968) is an Indian politician and a former bureaucrat who is the current and 7th Chief Minister of Delhi since February 2015. He was also the Chief Minister of Delhi from December 2013 to February 2014, stepping down after 49 days of assuming power. Currently, he is the national convener of the Aam Aadmi Party, which won the 2015 Delhi Assembly elections with a historic majority, obtaining 67 out of 70 assembly seats. Read more on Wikipedia

Since 2007, the English Wikipedia page of Arvind Kejriwal has received more than 3,216,832 page views. His biography is available in 27 different languages on Wikipedia making him the 13,696th most popular politician.