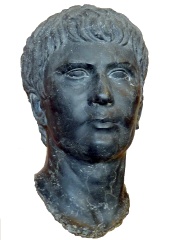 Marcus Agrippa Postumus (12 BC – AD 14), later named Agrippa Julius Caesar, was a Roman nobleman who was the youngest son of Marcus Vipsanius Agrippa and Julia the Elder, the daughter and only biological child of the Roman Emperor Augustus. Augustus initially considered Postumus as a potential successor, and formally adopted him as his heir, but banished him from Rome in AD 6 on account of his ferocia ("beastly nature"). In effect (though not in law), this action cancelled his adoption, and virtually assured Tiberius' emplacement as Augustus' sole heir. Read more on Wikipedia

Agrippa Postumus was the son of Marcus Agrippa and Julia the Elder. He was born in 12 BC and was the last surviving grandson of Augustus. He was named after his father and was given the title "Princeps Iuventutis" which means "Prince of Youth."

Others Born in 12 BC