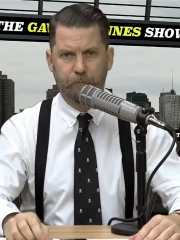 Gavin McInnes (; born July 17, 1970) is a Canadian-British writer and far-right political commentator. McInnes is known for his controversial promotion of violence against political opponents.Born in Hitchin, Hertfordshire, England and immigrating to Canada at a young age, McInnes graduated from Carleton University in Ottawa before moving to Montreal and cofounding Vice Magazine with Suroosh Alvi and Shane Smith. He relocated with Vice Media to New York City in 2001. Read more on Wikipedia

Since 2007, the English Wikipedia page of Gavin McInnes has received more than 4,140,014 page views. His biography is available in 47 different languages on Wikipedia making him the 75th most popular presenter.