The following people are considered by Pantheon to be the top 10 most legendary British Presenters of all time. This list of famous British Presenters is sorted by HPI (Historical Popularity Index), a metric that aggregates information on a biography’s online popularity. Visit the rankings page to view the entire list of British Presenters. 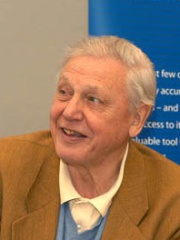 With an HPI of 72.17, David Attenborough is the most famous British Presenter.  His biography has been translated into 67 different languages on wikipedia.

Sir David Frederick Attenborough (; born 8 May 1926) is an English broadcaster, natural historian and author. He is best known for writing and presenting, in conjunction with the BBC Natural History Unit, the nine natural history documentary series forming the Life collection that constitute a comprehensive survey of animal and plant life on Earth. Attenborough is a former senior manager at the BBC, having served as controller of BBC Two and director of programming for BBC Television in the 1960s and 1970s. His filmography as writer, presenter and narrator spans eight decades; it includes Zoo Quest, Natural World, Wildlife on One, the Planet Earth franchise, The Blue Planet and its sequel. He is the only person to have won BAFTAs for programmes in black and white, colour, high-definition, 3D and 4K resolutions. While Attenborough's earlier work focused more on the wonders of the natural world, his later work has been more vocal in support of environmental causes. He has advocated for restoring planetary biodiversity, limiting population growth, renewable energy, reducing meat consumption, and setting aside more areas for natural preservation. He has been criticised for expressing controversial views on human overpopulation. He considers his 2020 documentary film, David Attenborough: A Life On Our Planet, his personal witness statement of his life and the future. On his broadcasting and passion for nature, NPR stated he "roamed the globe and shared his discoveries and enthusiasms with his patented semi-whisper way of narrating". In 2018 and 2019, Attenborough received Primetime Emmy Awards for Outstanding Narrator. He is widely considered a national treasure in the UK, although he himself does not like the term. He is the younger brother of the late director, producer and actor Richard Attenborough, and older brother of the late motor executive John Attenborough. 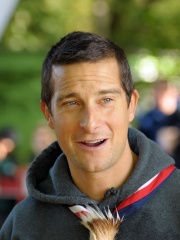 With an HPI of 66.94, Bear Grylls is the 2nd most famous British Presenter.  His biography has been translated into 55 different languages.

Edward Michael "Bear" Grylls (born 7 June 1974) is a British adventurer, writer, television presenter and businessman. Grylls first drew attention after embarking on a number of adventures, and then became widely known for his television series Man vs. Wild (2006–2011). He is also involved in a number of wilderness survival television series in the UK and US, such as Running Wild with Bear Grylls and The Island with Bear Grylls. In July 2009, Grylls was appointed the youngest-ever Chief Scout of the United Kingdom and Overseas Territories at age 35, a post he has held for a second term since 2015. 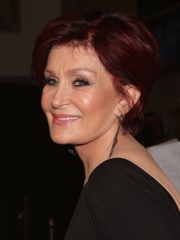 With an HPI of 63.15, Sharon Osbourne is the 3rd most famous British Presenter.  Her biography has been translated into 26 different languages.

Sharon Rachel Osbourne (née Levy; born 9 October 1952) is a British-American television personality, music manager, and author. She is married to heavy metal singer-songwriter Ozzy Osbourne and came to public prominence after appearing on The Osbournes (2002–2005), a reality television show that aired on MTV, which followed her family's daily life. Osbourne later became a talent show judge on television shows, such as The X Factor (2004–2007, 2013, 2016–2017) and America's Got Talent (2007–2012). Osbourne is credited with reviving her husband's heavy metal career by founding the summer Ozzfest tour, which was held almost annually between 1996 and 2018. From 2003 to 2006, she hosted her own television talk show The Sharon Osbourne Show, which was syndicated to various US channels and also shown in the UK on Sky One. In 2010, Osbourne was a contestant on NBC's The Celebrity Apprentice, and became a co-host on the CBS talk show The Talk, appearing until 2021. Osbourne has released three autobiographical books and two novels. Her first autobiography, Extreme, debuted at number one on the Sunday Times bestseller list, and went on to become the most successful female autobiography ever. 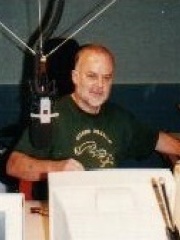 With an HPI of 62.44, John Peel is the 4th most famous British Presenter.  His biography has been translated into 29 different languages.

John Robert Parker Ravenscroft (30 August 1939 – 25 October 2004), known professionally as John Peel, was an English disc jockey, radio presenter, record producer and journalist. He was the longest-serving of the original BBC Radio 1 DJs, broadcasting regularly from 1967 until his death in 2004. Peel was one of the first broadcasters to play psychedelic rock and progressive rock records on British radio. He is widely acknowledged for promoting artists working in a multitude of genres, including pop, dub reggae, punk rock and post-punk, electronic music and dance music, indie rock, extreme metal, and British hip hop. Fellow DJ Paul Gambaccini described Peel as "the most important man in music for about a dozen years". Peel's Radio 1 shows were notable for the regular "Peel sessions", which usually consisted of four songs recorded by an artist live in the BBC's studios, and which often provided the first major national coverage to bands that would later achieve fame. Another feature was the annual Festive Fifty countdown of his listeners' favourite records of the year.Peel appeared on television occasionally as one of the presenters of Top of the Pops in the 1980s, and provided voice-over commentary for a number of BBC programmes. He became popular with the audience of BBC Radio 4 for his Home Truths programme, which ran from the 1990s, featuring unusual stories from listeners' domestic lives. 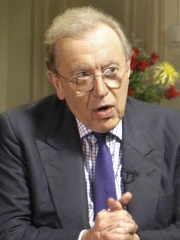 With an HPI of 61.25, David Frost is the 5th most famous British Presenter.  His biography has been translated into 32 different languages.

Sir David Paradine Frost (7 April 1939 – 31 August 2013) was a British television host, journalist, comedian and writer. He rose to prominence during the satire boom in the United Kingdom when he was chosen to host the satirical programme That Was the Week That Was in 1962, and his success on this show led to work as a host on American television. He became known for his television interviews with senior political figures, among them the Nixon interviews with President Richard Nixon in 1977 which were adapted into a stage play and film. Frost interviewed all eight British prime ministers serving between 1964 and 2016, and all seven American presidents in office between 1969 and 2008.He was one of the people behind the launch of ITV station TV-am in 1983. He was the inaugural host of the US newsmagazine programme Inside Edition. He hosted the Sunday morning interview programme Breakfast with Frost for the BBC from 1993 to 2005, and spent two decades as host of Through the Keyhole. From 2006 to 2012, he hosted the weekly programme Frost Over the World on Al Jazeera English, and the weekly programme The Frost Interview from 2012. He received the BAFTA Fellowship from the British Academy of Film and Television Arts in 2005 and the Lifetime Achievement Award at the Emmy Awards in 2009. Frost died on 31 August 2013, aged 74, on board the cruise ship MS Queen Elizabeth, where he had been engaged as a speaker. His memorial stone was unveiled in Poets' Corner of Westminster Abbey in March 2014. 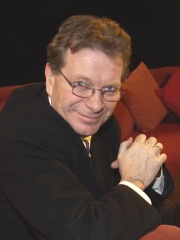 With an HPI of 54.43, Tony Wilson is the 6th most famous British Presenter.  His biography has been translated into 17 different languages.

Anthony Howard Wilson (20 February 1950 – 10 August 2007) was a British record label owner, radio and television presenter, nightclub manager, impresario and a journalist for Granada Television and the BBC. Wilson was behind some of Manchester's most successful bands. He was one of the five co-founders of Factory Records and the founder and manager of the Haçienda nightclub. Wilson was known as "Mr Manchester", dubbed as such for his work in promoting the culture of Manchester throughout his career. He was portrayed by Steve Coogan in Michael Winterbottom's film 24 Hour Party People (2002), and by Craig Parkinson in Anton Corbijn's film Control (2007). Depending on what he was working on, he would switch between alternate versions of his name. For example, when he was being a serious formal and respectable persona, such as certain TV presenting appearances, he would use "Anthony H Wilson", or for example when reporting for Granada Reports he was referred to as "Anthony Wilson", otherwise he would go by "Tony Wilson" most commonly while on Factory Records business. 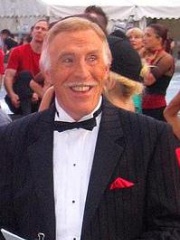 With an HPI of 53.29, Bruce Forsyth is the 7th most famous British Presenter.  His biography has been translated into 16 different languages.

Sir Bruce Joseph Forsyth-Johnson (22 February 1928 – 18 August 2017) was a British entertainer and presenter whose career spanned more than 70 years. Forsyth came to national attention from the late 1950s through the ITV series Sunday Night at the London Palladium. He went on to host several game shows, including The Generation Game, Play Your Cards Right, The Price Is Right and You Bet!. He co-presented Strictly Come Dancing from 2004 to 2013. In 2012, Guinness World Records recognised Forsyth as having the longest television career for a male entertainer. 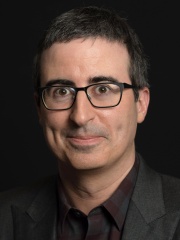 With an HPI of 52.85, John Oliver is the 8th most famous British Presenter.  His biography has been translated into 40 different languages.

John William Oliver (born 23 April 1977) is a British-American comedian, writer, producer, political commentator, actor, and television host. Oliver started his career as a stand-up comedian in the United Kingdom. He came to wider attention for his work in the United States on The Daily Show with Jon Stewart as its senior British correspondent from 2006 to 2013. Oliver won three Primetime Emmy Awards for writing for The Daily Show and was the show's guest host for an eight-week period in 2013. In addition, Oliver co-hosted the satirical comedy podcast The Bugle (2007–2015) with Andy Zaltzman, with whom Oliver had previously co-hosted the radio series Political Animal, and hosted John Oliver's New York Stand-Up Show on Comedy Central from 2010 to 2013. He has also acted on television, most notably in a recurring role as Dr Ian Duncan on the NBC sitcom Community, and in films, notably voice-over work in The Smurfs (2011), The Smurfs 2 (2013), and the 2019 remake of The Lion King. He became a US citizen in 2019. Since 2014, Oliver has been the host of the HBO series Last Week Tonight with John Oliver. He has received widespread critical and popular recognition for his work on the series, whose influence over US culture, legislation, and policymaking has been dubbed the "John Oliver effect". For his work on Last Week Tonight, Oliver has won thirteen Emmy Awards and two Peabody Awards and was included in the 2015 Time 100, being described as a "comedic agent of change...powerful because he isn't afraid to tackle important issues thoughtfully, without fear or apology". Oliver's work has been described as journalism or investigative journalism, a description Oliver rejects. 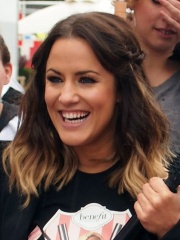 With an HPI of 52.51, Caroline Flack is the 9th most famous British Presenter.  Her biography has been translated into 19 different languages.

Caroline Louise Flack (9 November 1979 – 15 February 2020) was an English television and radio presenter. She won the twelfth series of Strictly Come Dancing and presented The X Factor and Love Island. Flack grew up in Norfolk and took an interest in dancing and theatre while at school. She began her professional career as an actress, starring in Bo' Selecta! (2002) and presented various ITV2 shows including I'm a Celebrity...Get Me Out of Here! NOW! (2009–2010) and The Xtra Factor (2011–2013). Her Strictly Come Dancing win (2014) was praised for achieving a record perfect score in the final. The following year she began presenting The X Factor (2015) – replacing the long-standing presenter Dermot O'Leary – and Love Island (2015–2019). She left Love Island in December 2019 after being arrested for assault allegations. On 15 February 2020, Flack was found dead at her home in North East London; in August, a coroner's inquest recorded a verdict of suicide. 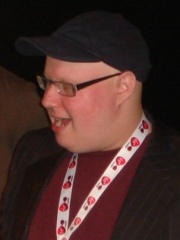 With an HPI of 52.25, Matt Lucas is the 10th most famous British Presenter.  His biography has been translated into 31 different languages.

Which Presenters were alive at the same time? This visualization shows the lifespans of the 4 most globally memorable Presenters since 1700.