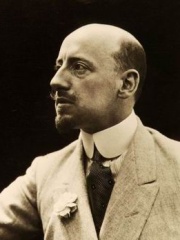 General Gabriele D'Annunzio, Prince of Montenevoso (UK: , US: , Italian: [ɡabriˈɛːle danˈnuntsjo]; 12 March 1863 – 1 March 1938), sometimes written d'Annunzio, was an Italian ultra-nationalist, poet, playwright, orator, journalist, aristocrat, and army officer during World War I. He occupied a prominent place in Italian literature from 1889 to 1910 and later political life from 1914 to 1924. He was often referred to under the epithets Il Vate ("the Poet") or Il Profeta ("the Prophet"). D'Annunzio was associated with the Decadent movement in his literary works, which interplayed closely with French Symbolism and British Aestheticism. Read more on Wikipedia

Gabriele D'Annunzio was an Italian poet, journalist, soldier, and politician. He was also the founder of the Italian literary movement called Decadentism.