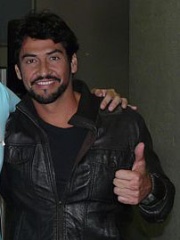 Gabriel Porras (born Carlos Gabriel Porras Flores, February 13, 1968 in Mexico City, Mexico) is a Mexican actor. He began his acting career working for TV Azteca in telenovelas like "Tres Veces Sofia" along with Mexican diva Lucía Méndez and "El Tio Alberto". His acting career strengthened when he played his first protagonist role in a "El Alma Herida", a telenovela, produced by Telemundo which is owned by NBC Universal. Read more on Wikipedia

Among actors, Gabriel Porras ranks 6,102 out of 10,030. Before him are Stephen Dunham, Kirron Kher, Linda Arvidson, Melvil Poupaud, Harisu, and Yuichi Nakamura. After him are RJ Mitte, Warren William, Natassia Malthe, Clint Howard, Ann B. Davis, and Roger Bart.

Among ACTORS In Mexico