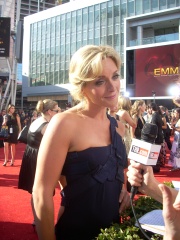 Jane Krakowski (; née Krajkowski; born October 11, 1968) is an American actress, comedienne, and singer. She is best known for her starring role as Jenna Maroney in the NBC satirical comedy series 30 Rock (2006–2013, 2020), for which she received four Primetime Emmy Award nominations for Outstanding Supporting Actress in a Comedy Series. Other notable television roles have included Elaine Vassal in the Fox legal comedy-drama series Ally McBeal (1997–2002) and Jacqueline White in the Netflix comedy series Unbreakable Kimmy Schmidt (2015–2020).Krakowski made her feature film debut as Cousin Vicki Johnson in the road comedy National Lampoon's Vacation (1983), which was followed by roles in The Flintstones in Viva Rock Vegas (2000), Ice Age (2002), Alfie (2004), Open Season (2006), Pixels (2015), and The Willoughbys (2020).Krakowski regularly performs on stage, winning the Tony Award for Best Featured Actress in a Musical for her performance in the Broadway revival of Nine (2003), as well as receiving Tony Award nominations for Grand Hotel (1989) and She Loves Me (2016). Read more on Wikipedia