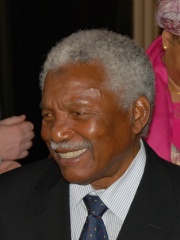 Ali Hassan Mwinyi (born 8 May 1925 in Kivure, Pwani Region, Tanzania) is a Tanzanian politician who served as the second President of the United Republic of Tanzania from 1985 to 1995. Previous posts include Interior Minister and Vice President. He also was chairman of the ruling party, the Chama Cha Mapinduzi (CCM) from 1990 to 1996.During Mwinyi's terms Tanzania took the first steps to reverse the socialist policies of Julius Nyerere. Read more on Wikipedia

Since 2007, the English Wikipedia page of Ali Hassan Mwinyi has received more than 198,501 page views. His biography is available in 33 different languages on Wikipedia making him the 7,670th most popular politician.

Among politicians, Ali Hassan Mwinyi ranks 7,630 out of 14,801. Before him are Eugène Schneider, Prince Ernest Augustus of Hanover, Svante Nilsson, Himiltrude, Agapenor, and Inayatullah Khan. After him are Princess Caroline-Mathilde of Denmark, Devlet Bahçeli, Baysunghur, Robert Cecil, 1st Earl of Salisbury, William, Prince of Wied, and Ban Biao.