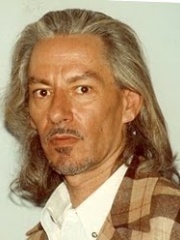 Frank A. Silva (October 31, 1950 – September 13, 1995) was an American set dresser and sometime actor best known for his performance as the evil spirit Killer BOB in the TV series Twin Peaks.Silva had a degree in lighting design from San Francisco State University and worked as a prop master and set decorator on several films including David Lynch's Dune and Wild at Heart.Silva worked on Lynch's Twin Peaks. According to David Lynch on the 2007 Gold Edition DVD release of Twin Peaks, Lynch was upstairs in the Laura Palmer house, near Silva as he worked, and suddenly realized that Silva might have a place in the show. He asked Silva if he was an actor, and Silva said that he was. Read more on Wikipedia

Since 2007, the English Wikipedia page of Frank Silva has received more than 583,064 page views. His biography is available in 15 different languages on Wikipedia making him the 4,073rd most popular actor.