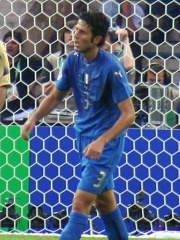 Fabio Grosso (Italian pronunciation: [ˈfaːbjo ˈɡrɔsso]; born 28 November 1977) is an Italian former professional football player and manager of Sion. After playing for several smaller Italian clubs, such as Renato Curi, Chieti and Perugia, he made his breakthrough during his two seasons with Palermo, which earned him a move to defending Serie A champions Inter Milan in 2006. During his only season with Inter, he helped the club defend the Serie A title and win the Supercoppa Italiana. Read more on Wikipedia

Since 2007, the English Wikipedia page of Fabio Grosso has received more than 566,698 page views. His biography is available in 43 different languages on Wikipedia making him the 1,496th most popular soccer player.