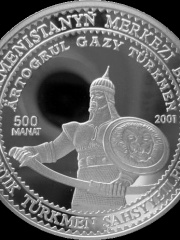 Ertuğrul (Ottoman Turkish: ارطغرل‎, romanized: Erṭoġrıl, died c. 1280) was the father of Osman I. Little is known about Ertuğrul's life. According to Ottoman tradition, he was the son of Suleyman Shah, the leader of the Kayı tribe (a claim which has come under criticism from many historians) of Oghuz Turks, who fled from western Central Asia to Anatolia to escape the Mongol conquests, but he may instead have been the son of Gündüz Alp. Read more on Wikipedia

Since 2007, the English Wikipedia page of Ertuğrul has received more than 4,622,573 page views. His biography is available in 48 different languages on Wikipedia making him the 188th most popular politician.

Page views of Ertuğruls by language

Among politicians, Ertuğrul ranks 186 out of 14,801. Before him are Rudolf Hess, Ariel Sharon, Rodrigo Duterte, Gamal Abdel Nasser, Mehmed IV, and Francis II of France. After him are Cyrus the Great, Alfred the Great, Batu Khan, Konrad Adenauer, George H. W. Bush, and Septimius Severus.

Among people born in 1198, Ertuğrul ranks 1. After him are Berengaria of Portugal, Alexander II of Scotland, Stefan Vladislav, Renaud de Vichiers, Beatrice of Swabia, Ramon Berenguer IV, Count of Provence, and Beatrice of Savoy. Among people deceased in 1281, Ertuğrul ranks 1. After him are Henry V, Count of Luxembourg, Ivaylo of Bulgaria, and Anna of Hungary.