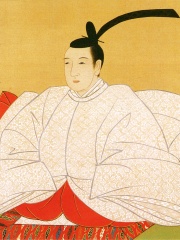 Emperor Ninkō (仁孝天皇, Ninkō-tennō, 16 March 1800 – 21 February 1846) was the 120th Emperor of Japan, according to the traditional order of succession. Ninkō's reign spanned the years from 1817 until his death in 1846, and saw further deterioration of the power of the ruling Shōgun. Disasters, which included famine, combined with corruption and increasing Western interference, helped to erode public trust in the bakufu government. Read more on Wikipedia

Emperor Ninkō is most famous for the Tenpō Reforms, which were a series of economic and political reforms that he enacted during his reign.

Among politicians, Emperor Ninkō ranks 1,548 out of 15,710. Before him are Felix Yusupov, Möngke Khan, Nancy Pelosi, Tiberius II Constantine, Æthelred the Unready, and Henry II of Navarre. After him are Ahmad Sanjar, Josef Kramer, Emperor Kōkaku, Lajos Kossuth, Gongmin of Goryeo, and Archduchess Maria Anna of Austria.