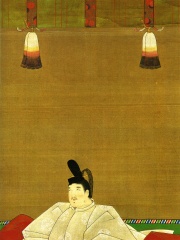 Emperor Go-Murakami (後村上天皇, Go-Murakami-tennō) (1328 – March 29, 1368) was the 97th emperor of Japan, according to the traditional order of succession, and a member of the Southern Court during the Nanboku-chō period of rival courts. He reigned from September 18, 1339, until March 29, 1368 (Shōhei 23, 11th day of the 3rd month). His personal name was Noriyoshi (義良). Read more on Wikipedia

Among politicians, Emperor Go-Murakami ranks 7,614 out of 15,577. Before him are Zenkō Suzuki, Prince Philipp of Saxe-Coburg and Gotha, King Xian of Zhou, Demetrios Palaiologos, Yamamoto Kansuke, and Albert Sarraut. After him are Rafi Eitan, Princess Isabella of Croÿ, George I of Bulgaria, Frans Timmermans, Juan Vicente Gómez, and Mika Špiljak.

Among people born in 1328, Emperor Go-Murakami ranks 8. Before him are Antipope Benedict XIII, Louis II, Elector of Brandenburg, Joan of Kent, Eleanor of Portugal, Queen of Aragon, Blanche of France, Duchess of Orléans, and Peter I of Cyprus. After him are Nikephoros II Orsini and Leopold II, Duke of Austria. Among people deceased in 1368, Emperor Go-Murakami ranks 6. Before him are Ibn Battuta, Orcagna, Guy de Chauliac, Blanche of Lancaster, and Lionel of Antwerp, 1st Duke of Clarence. After him are Ilyas Khoja and Marco Cornaro.