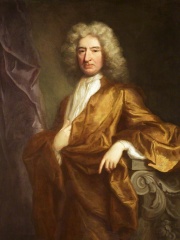 Edward Colston (2 November 1636 – 11 October 1721) was an English merchant, slave trader, philanthropist, and Tory Member of Parliament. Colston followed his father in the family business becoming a sea merchant, initially trading in wine, fruits and textiles, mainly in Spain, Portugal and other European ports. By 1680, he became involved in the slave trade as a senior executive of the Royal African Company, which held a monopoly on the English trade in African slaves. Read more on Wikipedia

Among people born in 1636, Edward Colston ranks 6. Before him are Nicolas Boileau-Despréaux, Ferdinand Maria, Elector of Bavaria, Princess Henriette Adelaide of Savoy, Hedwig Eleonora of Holstein-Gottorp, and Laura Mancini. After him are Adriaen van de Velde, Dorothea of Schleswig-Holstein-Sonderburg-Glücksburg, Melchior d'Hondecoeter, Ferdinand Albert I, Duke of Brunswick-Wolfenbüttel-Bevern, Nikolai Spathari, and Melchiorre Cafà. Among people deceased in 1721, Edward Colston ranks 10. Before him are Mary Read, Charles Vane, Anton Florian, Prince of Liechtenstein, Louise of Mecklenburg-Güstrow, Marguerite Louise d'Orléans, and Johann Christoph Bach. After him are Rudolf Jakob Camerarius and Elihu Yale.