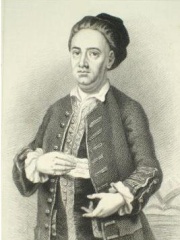 Edward Cave (27 February 1691 – 10 January 1754) was an English printer, editor and publisher. He coined the term "magazine" for a periodical, founding The Gentleman's Magazine in 1731, and was the first publisher to successfully fashion a wide-ranging publication.The son of a cobbler, Cave was born in Newton near Rugby, Warwickshire and attended Rugby School, but was expelled after being accused of stealing from the headmaster Henry Holyoake. He worked at a variety of jobs, including timber merchant, reporter and printer. Read more on Wikipedia

Among people born in 1691, Edward Cave ranks 6. Before him are Elisabeth Christine of Brunswick-Wolfenbüttel, Philip Miller, Giovanni Paolo Panini, Tsarevna Catherine Ivanovna of Russia, and Louis VIII, Landgrave of Hesse-Darmstadt. After him are Francesco Feo and Mir Jafar. Among people deceased in 1754, Edward Cave ranks 11. Before him are Henry Fielding, Maria Anna of Austria, Giovanni Battista Piazzetta, Jacopo Riccati, Henry Pelham, and Maria Teresa Felicitas d'Este. After him are Wu Jingzi, Christian August, Duke of Schleswig-Holstein-Sonderburg-Augustenburg, Philippe Néricault Destouches, and James Gibbs.