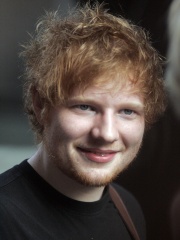 Edward Christopher Sheeran (; born 17 February 1991) is an English singer-songwriter, record producer, musician, and actor. Sheeran has sold more than 150 million records worldwide, making him one of the world's best-selling music artists. He has 84.5 million RIAA-certified units in the US, and two of his albums are in the list of the best-selling albums in UK chart history: × at number 20, and ÷ at number 34. Read more on Wikipedia

Billboard
Ed Sheeran Sends ‘Shivers’ Throughout NYC at 2021 VMAs
At the 2021 MTV VMAs, Ed Sheeran opted to perform his most recent track instead of his latest ubiquitous hit, and the results were triumphant, as “Shivers” was given a spotlight under the New York City stars on Sunday night (Sept. 12).
Jason Lipshutz
Billboard
Ed Sheeran Shares What He’s Learned From Working With His Artist Maisie Peters
Sheeran walked the red carpet alongside his artist, burgeoning pop singer Maisie Peters, and gushed about what he learned so far from her during their time together.
Carl Lamarre
Just Jared
Ed Sheeran Is All Smiles During His Performance of 'Shivers' at the 2021 MTV VMAs - Watch the Video!
Ed Sheeran is performing his new song! The 30-year-old singer hit the stage for the 2021 MTV Video Music Awards at Toyota’s Brooklyn Bridge Stage on Sunday night (September 12) in New York City. He was introduced by his pal Rita Ora as “one of the nicest huma…
Just Jared
Daily Mail
Charli XCX, Rita Ora and Ed Sheeran lead British stars at MTV VMAs
Charli XCX, Rita Ora and Ed Sheeran were all making statements on the red carpet as they arrived at the star-studded event in sensational style
Ciara Farmer