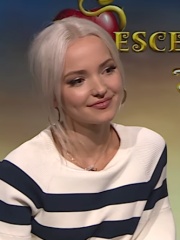 Dove Olivia Cameron (born Chloe Celeste Hosterman; January 15, 1996) is an American actress and singer, who played a dual role as the eponymous characters in the Disney Channel teen sitcom Liv and Maddie, for which she won the Daytime Emmy Award for Outstanding Performer in Children's Programming. She has also portrayed Mal in the Descendants film series. As a singer, Cameron made her debut with the soundtrack album Liv and Maddie (2015). Read more on Wikipedia

Since 2007, the English Wikipedia page of Dove Cameron has received more than 10,811,036 page views. Her biography is available in 57 different languages on Wikipedia making her the 4,145th most popular actor.