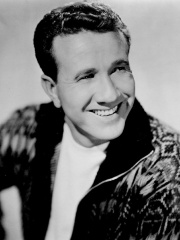 Martin David Robinson (September 26, 1925 – December 8, 1982), known professionally as Marty Robbins, was an American singer, songwriter, actor, multi-instrumentalist, and NASCAR racing driver. Robbins was one of the most popular and successful country and western singers for most of his nearly four-decade career, which spanned from the late 1940s to the early 1980s. Born in Glendale, Arizona, Robbins taught himself guitar while serving in the United States Navy during World War II, and subsequently drew fame performing in clubs in and around his hometown. Read more on Wikipedia

Since 2007, the English Wikipedia page of Marty Robbins has received more than 2,061,954 page views. His biography is available in 18 different languages on Wikipedia making him the 1,389th most popular singer.

Among singers, Marty Robbins ranks 1,396 out of 3,001. Before him are Yolandi Visser, Hasmik Papian, Ezio Pinza, Joacim Cans, Thongchai McIntyre, and Kim Deal. After him are Kelly Clarkson, Polina Gagarina, Ava Max, Halsey, MØ, and Whigfield.