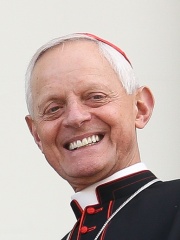 Donald William Wuerl (born November 12, 1940) is an American prelate of the Catholic Church, and was Archbishop of Washington, D.C. from 2006 to 2018. He was elevated by Pope John Paul II to serve as Auxiliary Bishop of Seattle (1986–1987), and Bishop of Pittsburgh (1988–2006). He was named Archbishop of Washington by Pope Benedict XVI and made a cardinal by him in 2010. Read more on Wikipedia

Since 2007, the English Wikipedia page of Donald Wuerl has received more than 334,801 page views. His biography is available in 19 different languages on Wikipedia making him the 1,765th most popular religious figure.

Among religious figures, Donald Wuerl ranks 1,757 out of 2,001. Before him are Thomas Williams, Kriengsak Kovitvanit, Georg Sterzinsky, Remigius of Rouen, Aldhelm, and Jaime Sin. After him are Paul I of Constantinople, John Colet, Severino Poletto, Jean Marcel Honoré, Silvano Piovanelli, and Laurean Rugambwa.