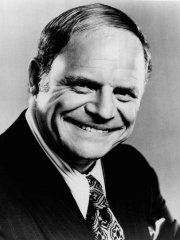 Donald Jay Rickles (May 8, 1926 – April 6, 2017) was an American stand-up comedian, actor, and author, known especially for his insult comedy. His film roles included Run Silent, Run Deep (1958) with Clark Gable, Kelly's Heroes (1970) with Clint Eastwood and Casino (1995) with Robert De Niro; beginning in 1976, he enjoyed a two-year run starring in the NBC television sitcom C.P.O. Sharkey and had his own sitcom called The Don Rickles Show (1972). A headline performer at Las Vegas hotel-casinos and peripheral member of the Rat Pack via friendship with Frank Sinatra, Rickles received widespread exposure as a frequent guest on talk and variety shows, including The Dean Martin Show, The Tonight Show Starring Johnny Carson and Late Show with David Letterman, and later voicing Mr. Read more on Wikipedia

Since 2007, the English Wikipedia page of Don Rickles has received more than 7,413,275 page views. His biography is available in 64 different languages on Wikipedia making him the 907th most popular comedian.