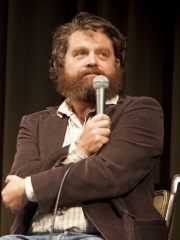 Zachary Knight Galifianakis (; born October 1, 1969) is an American actor, comedian, and writer who came to prominence with his Comedy Central Presents special in 2001 and presented his own show called Late World with Zach on VH1 the following year. He has also starred in films, such as The Hangover trilogy (2009–2013), Due Date (2010), Puss in Boots (2011), The Campaign (2012), Birdman or (The Unexpected Virtue of Ignorance) (2014), Masterminds (2016), and The Lego Batman Movie (2017). Galifianakis is the host of the Emmy Award-winning talk show Between Two Ferns with Zach Galifianakis on the Funny or Die website. Read more on Wikipedia

Since 2007, the English Wikipedia page of Zach Galifianakis has received more than 6,563,200 page views. His biography is available in 41 different languages on Wikipedia making him the 2,022nd most popular actor.