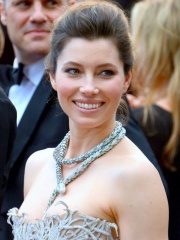 Jessica Claire Timberlake (née Biel ; born March 3, 1982) is an American actress, model, producer, and singer. Biel began her career as a vocalist appearing in musical productions until she was cast as Mary Camden in the family drama series 7th Heaven (1996–2006), in which she achieved recognition. The series is the longest-running series that aired on The WB channel and the longest-running family drama in television history.In 1997, she won the Young Artist Award for her role in the drama film Ulee's Gold. Read more on Wikipedia

Since 2007, the English Wikipedia page of Jessica Biel has received more than 15,147,553 page views. Her biography is available in 68 different languages on Wikipedia making her the 1,214th most popular actor.